SAL update time for my current cross stitch project. We share every three weeks and link to each others blogs (the links are at the bottom of this post).

I’ve been a bit panicky about finishing this cross stitch lately. For a while there I didn’t think I would manage it. I’m aiming to be finished by the middle of November so that I can package it up and ship it off to get it where it needs to go for Christmas but this last couple of weeks I’ve been thinking that maybe I should shelve it until after Christmas as if it wasn’t going to be finished in time then at least I could do some other christmassy crafts. But I had a bit of a break through last week and after spending a whole day (with rest breaks) stitching I think I might actually finish this next month! 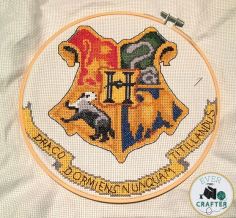 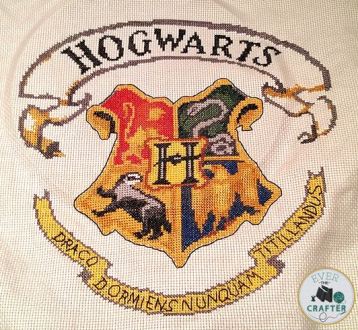 I’ve managed the HOGWARTS lettering and the whole of the outline of the banner. I now only have two shades of yellow to fill out the whole of the banner. Which, admittedly, is a lot of stitches but I’m getting there. I did make another mistake though, I had made a mistake in the bottom banner and it’s two stitches narrower than it should be (One on each side as I thought I would keep it even!) but I forgot about it and when I started to stitch the top banner I counted from the bottom banner. I only realised quite a while in so I didn’t fix it, just made a minor adjustment. I don’t think you can tell though so that’s good.

I will need to order some more of one of the yellows I think. I am really hoping that by the next update I will have finished this and be ready to wrap and send it out. I will have a rather large hole in my life as by then I will have been doing this for 6 months!