I’m linking up with Top Ten Tuesday which is now hosted over at The Artsy Reader Girl. This weeks topic was fall TBR or the books I want to read this autumn,

I still have about 60 books on my kindle so it wasn’t as easy as it sounds and I could easily have listed twenty or more books I want to read over the next few months. Seeing as I won’t read that many anyway I’ve narrowed it down.

Links go to goodreads, I’m not going to copy the blurbs for sequels because spoilers!

I think I got this book free from the tor book club or something. I had never heard of it before but it sounds amazing (also is about a thief so obviously I want to read it)

Jean le Flambeur gets up in the morning and has to kill himself before his other self can kill him first. Just another day in the Dilemma Prison. Rescued by the mysterious Mieli and her flirtatious spacecraft, Jean is taken to the Oubliette, the Moving City of Mars, where time is a currency, memories are treasures, and a moon-turned-singularity lights the night.Meanwhile, investigator Isidore Beautrelet, called in to investigate the murder of a chocolatier, finds himself on the trail of an archcriminal, a man named le Flambeur….

Indeed, in his many lives, the entity called Jean le Flambeur has been a thief, a confidence artist, a posthuman mind-burglar, and more. His origins are shrouded in mystery, but his deeds are known throughout the Heterarchy, from breaking into the vast Zeusbrains of the Inner System to stealing rare Earth antiques form the aristocrats of Mars. In his last exploit, he managed the supreme feat of hiding the truth about himself from the one person in the solar system hardest to hide from: himself. Now he has the chance to regain himself in all his power–in exchange for finishing the one heist he never quite managed.

I read A Darker Shade of Magic three years ago, It is one of my all time favourite books and yet….. I haven’t read this one. I will admit that I am scared that it won’t be as good and will devolve into romance between Kell and Lila. Although I want to read more Rhy.

One of Us is Lying by Karen M Mcmanus

I’m really looking forward to reading this book. I’m totally expecting to sit down and rush through it. I don’t read that much contemporary but this sounds suitably fatal to me

On Monday afternoon, five students at Bayview High walk into detention.
Bronwyn, the brain, is Yale-bound and never breaks a rule.
Addy, the beauty, is the picture-perfect homecoming princess.
Nate, the criminal, is already on probation for dealing.
Cooper, the athlete, is the all-star baseball pitcher.
And Simon, the outcast, is the creator of Bayview High’s notorious gossip app.

Only, Simon never makes it out of that classroom. Before the end of detention, Simon’s dead. And according to investigators, his death wasn’t an accident. On Monday, he died. But on Tuesday, he’d planned to post juicy reveals about all four of his high-profile classmates, which makes all four of them suspects in his murder. Or are they the perfect patsies for a killer who’s still on the loose?
Everyone has secrets, right? What really matters is how far you would go to protect them.

So I actually bought a book called The Queen of All the Crows and only after that did I find out that book was the start of a new trilogy set after this trilogy. It sounded really good so I bought this one to read first.

Elizabeth Barnabus lives a double life—as herself and as her brother, the private detective. She is trying to solve the mystery of a disappearing aristocrat and a hoard of arcane machines. In her way stand the rogues, freaks and self-proclaimed alchemists of a travelling circus. But when she comes up against an agent of the all-powerful Patent Office, her life and the course of history will begin to change. And not necessarily for the better…

The Extinction Trials by SM Wilson

I heard about this book on twitter, I think there was a chat or book club about it? I didn’t take part but it was pitched as the hunger games but with dinosaurs so…..

In Stormchaser and Lincoln’s ruined world, the only way to survive is to risk everything. To face a contest more dangerous than anyone can imagine. And they will do anything to win.

But in a land full of monsters – human and reptilian – they can’t afford to trust anyone. Perhaps not even each other… 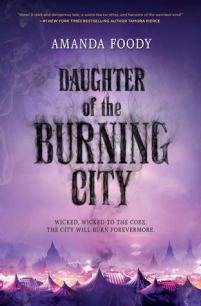 Daughter of the Burning City by Amanda Foody

I’ve wanted to read this for the longest time. It’s set at a circus and has ace and aro rep which is enough of a reason for me but the plot also sounds amazing

Sixteen-year-old Sorina has spent most of her life within the smoldering borders of the Gomorrah Festival. Yet even among the many unusual members of the traveling circus-city, Sorina stands apart as the only illusion-worker born in hundreds of years. This rare talent allows her to create illusions that others can see, feel and touch, with personalities all their own. Her creations are her family, and together they make up the cast of the Festival’s Freak Show.

But no matter how lifelike they may seem, her illusions are still just that—illusions, and not truly real. Or so she always believed…until one of them is murdered.

Desperate to protect her family, Sorina must track down the culprit and determine how they killed a person who doesn’t actually exist. Her search for answers leads her to the self-proclaimed gossip-worker Luca, and their investigation sends them through a haze of political turmoil and forbidden romance, and into the most sinister corners of the Festival. But as the killer continues murdering Sorina’s illusions one by one, she must unravel the horrifying truth before all of her loved ones disappear.

Strange the Dreamer by Laini Taylor

The dream chooses the dreamer, not the other way around—and Lazlo Strange, war orphan and junior librarian, has always feared that his dream chose poorly. Since he was five years old he’s been obsessed with the mythic lost city of Weep, but it would take someone bolder than he to cross half the world in search of it. Then a stunning opportunity presents itself, in the person of a hero called the Godslayer and a band of legendary warriors, and he has to seize his chance or lose his dream forever.

What happened in Weep two hundred years ago to cut it off from the rest of the world? What exactly did the Godslayer slay that went by the name of god? And what is the mysterious problem he now seeks help in solving?

The answers await in Weep, but so do more mysteries—including the blue-skinned goddess who appears in Lazlo’s dreams. How did he dream her before he knew she existed? And if all the gods are dead, why does she seem so real?

This might be the book I’m most excited to read on this list. I added it to goodreads YEARS ago but forgot about it. I finally bought it in June (before I went on my book buying ban) but I’ve been putting it off because what if its not PERFECT?!?! I need to be in the right frame of mind to give it my full attention

Of the various star systems that make up the Confederation, most lie thousands of light-years from First Earth-and out here, no one is free. The agencies that govern the Confederation are as corrupt as the crime bosses who patrol it, and power is held by anyone with enough greed and ruthlessness to claim it. That power is derived from one thing: metatech, the devices that allow people to travel great distances faster than the speed of light.

Jeth Seagrave and his crew of teenage mercenaries have survived in this world by stealing unsecured metatech, and they’re damn good at it. Jeth doesn’t care about the politics or the law; all he cares about is earning enough money to buy back his parents’ ship, Avalon, from his crime-boss employer and getting himself and his sister, Lizzie, the heck out of Dodge. But when Jeth finds himself in possession of information that both the crime bosses and the government are willing to kill for, he is going to have to ask himself how far he’ll go to get the freedom he’s wanted for so long.

I’ve wanted to give RR another chance because I hear such great things about his books but I never got on with the first Percy Jackson book. It felt too young for me, which makes sense with him being 11. I missed the boat on that one and don’t feel like I can start reading the second PJ series without the first. I wish I could have read it as a kid. But this one, I believe, is about a 17 year old so I’m hopeful.

Magnus Chase has seen his share of trouble. Ever since that terrible night two years ago when his mother told him to run, he has lived alone on the streets of Boston, surviving by his wits, staying one step ahead of the police and the truant officers.

One day, Magnus learns that someone else is trying to track him down—his uncle Randolph, a man his mother had always warned him about. When Magnus tries to outmaneuver his uncle, he falls right into his clutches. Randolph starts rambling about Norse history and Magnus’s birthright: a weapon that has been lost for thousands of years.

The more Randolph talks, the more puzzle pieces fall into place. Stories about the gods of Asgard, wolves, and Doomsday bubble up from Magnus’s memory. But he doesn’t have time to consider it all before a fire giant attacks the city, forcing him to choose between his own safety and the lives of hundreds of innocents. . . .

Sometimes, the only way to start a new life is to die 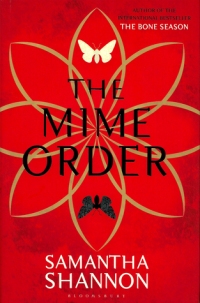 The Mime Order (The Bone Season #2) by Samantha Shannon

I read The Bone Season years ago. It established one of my favourite, if not the favourite, setting in anything I’ve read. Sci fi magic gangs in the London underground. Awesome. And then it got lovey dovey and moved to somewhere else. Disappointment. But someone on twitter told me there was a lot more London gang stuff in the sequel so I’m giving it a try. It better not disappoint me again.

So that’s my top ten books for my fall TBR. Hopefully I’ll read them all over the next few months. I’m terrible at sticking to TBRs but seeing as I currently have a limited amount of books to choose from I’m hopeful!

How about you, what’s the book your most looking forward to reading? And have you read any of these and what did you think? Should I move any up the queue?