Top 10 Tuesdays is a book tag hosted over at the artsy reader girls blog. This week was a freebie topic and seeing as 2018 is coming to an end I thought what better opportunity to tell you about 2018 releases I’m still looking forward to reading.

To be fair I have been on a book buying ban for the last six months in an attempt to get my owned tbr down to more manageable levels but now that’s a bit more under control (sort of) I can refocus back on some new releases and these are the ones in most excited about.

This was ridiculously hard to narrow down to just ten which just shows you how many 2018 releases I still need to read. It was so hard in fact that I only managed to narrow it down to 14….. Oops. But then I do have a goodreads shelf of about 40 so I still think this is an achievement and it’s not my fault there were so many amazing books being released this year.

I’ve split it into genres to help break it up as I know 14 is a really massive number….

Set around a 16 year old boy who lost his dad when police shot him, he struggles with panic attacks while his and his friends are treated like criminals. It deals with racism and oppression. Moss is also gay, and it sounds as if the book features lots of amazing friendship and family relationships.

A modern m/m cinderella retelling featuring a photo of a sharpie decorated converse and the help of social media. It sounds adorable and I’m definitely buying this for Christmas.

Two boys who meet accidentally and can’t quite make things work but keep meeting. This also sounds adorable and I’ve definitely been sleeping on meetcute contemporary way too much.

I’ve seen this described as the Curious Incident of the Dog in the Night Time mixed with a spy novel with some scifi elements. It’s about a teen math prodigy with severe anxiety disorder after someone tries to assassinate his mum

Rufus’ ex-boyfriend shows up on his doorstep just when he’s trying to move on but when they find his sister holding a knife, covered in the blood of her dead boyfriend, Rufus has to work with his ex to prove her innocence

The blurb for this is vague but it does involve prophecies, rebellions and a rebel group of diverse and queer teens fighting back against a high council of elder seers that rule the citadel

A village made a pact with a devil to sacrifice a young man to the devil’s forest every slaughtermoon in exchange for prosperity. Three friends go into the forest to face the devil together bound by their love for each other. I’m pretty sure this features a polyam relationship and a genderqueer MC too. It sounds spooky and twisty.

About a healer that must hide his magic but works in a hospital after a war. his magic gets exposed and he must investigate his patients murder. It features ptsd, estranged families and an m/m romance as well.

Italian Mafia families, a daughter that uses magic to turn their enemies into music boxes and two genderqueer shapeshifting characters that fall in love while trying to save their families.

Rune is hired to find a lady’s missing son but in questioning the nobility he may find the answers to his families massacre. And oh. Did I mention it’s set in new Atlantis, an island city where the atlanteans moved to after Atlantis was destroyed. I’m pretty sure it’s gay too and that it features a friendship that borders on a queer platonic friendship too. 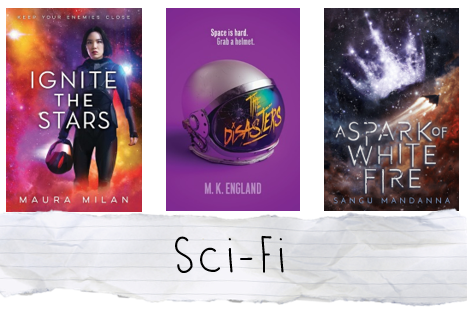 The notorious outlaw and brilliant pilot the commonwealth fears is actually a 17 year old girl who has dedicated her life to terrorising the imperialists that destroyed her home. But when she gets caught and forced to attend a military academy the friends she makes causes her to question her alliances. Featuring an Asian MC and slow burn romance

A bunch of kids get kicked out of a military space academy but on their trip home the academy gets destroyed by terrorists and they are the only survivors. They have to band together and find out what happened before they get the blame.

A space opera based on Indian myths and legends with intergalactic royal, curses, competitions and sentient warships. Sounds epic.

That’s my top fifteen 2018 releases I really need to read and writing this post has just made me want to read them all even more!

Have you read any of these? Are you planning to? What were your favourite 2018 releases? Also leave links to your own lists in the comments for me to check out too.