The year’s over! Ahhhh. Time to look back through all the books I’ve read this year. I’m doing the book survey which was made by Jamie over on this blog here. It’s a really fun tag, where you get to see the good, the bad and everything in between of what I read this year. I’ve edited it slightly, taken out a few questions that really don’t apply to me and merged some where the answer would be the same. It’s a long enough post even with those changes but I hope you’ll stick around to see what I thought. 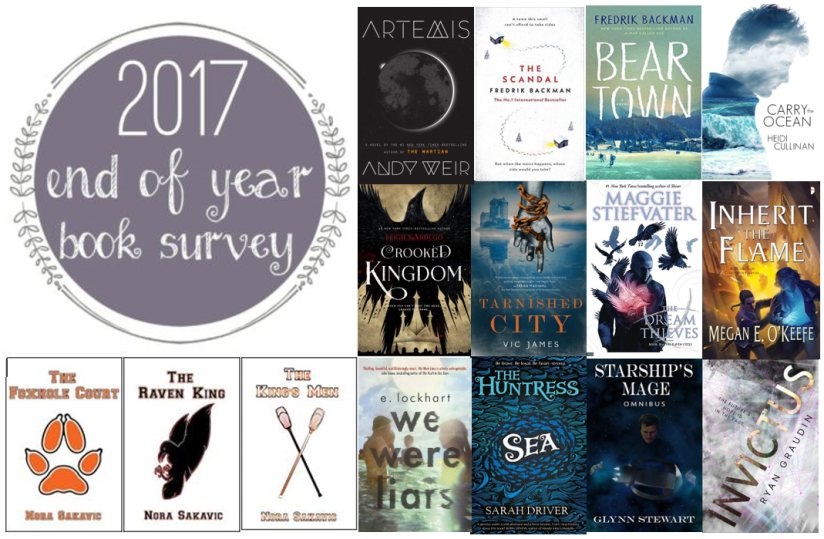 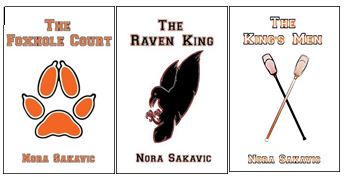 The Foxhole Court, The Raven King, The Kings Men. All For The Game Trilogy by Nora Sakavic.

Without a doubt this series was the best thing I read in 2017 and yes, I know it said book, but I’m going with the whole trilogy, I read it in a week and then reread it the next week. I’ll try not to say this for every single answer from here in.

2. Books you were excited about and thought you’d love but didn’t? 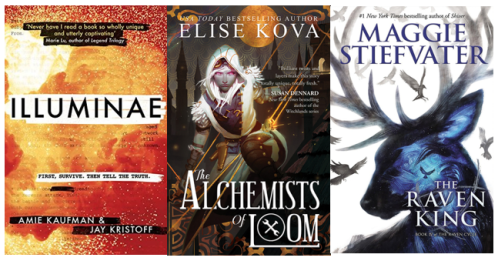 I was disappointed with illuminae, it was okay but nothing special to me but the one book that really disappointed me was The Alchemists of Loom, I’m not saying it was bad, because it wasn’t but it sounded perfect and going in I was fully ejecting a five star read and it just wasn’t. There were bits I really enjoyed but I wanted to love it. Also I finished The Raven Boys Cycle and found the last book, The Raven King, rather a disappointing end to an amazing series.

3. Most surprising (good or bad) book you read?

All For The Game, Yes, I know I said I’d try not to mention it too much but honestly, I wasn’t really expecting anything out of it. I read the blurb and didn’t really get interested but then a few weeks later saw it was on deal for less than a pound and thought I might as well. I ordered the next two books in the trilogy when I was only half way through the first book because it was amazing!

Okay, not mentioning the obvious, the best first book in a series I’ve read was Starship’s Mage. Best sequel would be either The Dream Thieves which was the best book in The Raven Cycle or Tarnished City which is book two in the Dark Gifts series by Vic James, I can’t wait for the sequel! Best final book in a series would either be Crooked Kingdom (Six of Crows duology by Leigh Bardugo) or Inherit the Flame (Scorched Continent Trilogy by Megan O’keefe).

5. Best book from a genre you don’t usually read/was out of your comfort zone?

Without a doubt it was The Scandal by Fredrik Backman (also published as Beartown in the US, the name and the cover are both so much better). It left me with heartache and I had to keep putting it down only to pick it up again seconds later because I needed to know!

6. Most action packed/ unputdownable book of the year?

Tarnished City by Vic James and Invictus by Ryan Graudin were both books that I devoured.

All For The Game, I mean, I’ve already reread it but I’m sure I will again.

Kaz Brekker from the Six of Crows duology and Silyen Jardine from the Dark Gifts series,. I love a good morally grey character and these are the best I’ve read in a very long time.

The Scandal/Beartown, it was written from about a dozen point of views and changed every few paragraphs which sounds like it should be hell but it was so beautiful. I kept having to stop and reread passages because they were so well written.

The scandal by Fredrik Backman or Carry the Ocean by Heidi Cullinan. One’s about the aftermath of rape in a small hockey town and the other is about an autistic guy and a guy with depression and anxiety learning to live independently, grow and fall in love.

Starship’s Mage by Glynn Stewart. I mean, I’d never heard of it before so that was why I hadn’t read it before but magic on a spaceship, a ragtag crew, space pirates. It was brilliant and hopefully I’ll get to read some of the sequels this year.

13. Favourite passage/quote from a book?

I should make a note of these things more.  I was going to add a quote from Beartown but honestly that book is so beautifully written that I’d have ended up just copying the whole book. If you want to take a look at some quotes here’s the goodreads quotes page from that book but otherwise just go read the book!

“Fiction is truth, even if it is not fact.If you believe only in facts and forget stories, your brain will live but your heart will die.” – Lord of Shadows by Cassandra Clare

“She was focusing hard on the task ahead. That was the way you got through any huge project: take it one small, manageable step at a time. Don’t build a starship, just bolt on a plate. Don’t write a novel, just write a sentence.” – The Wrong Stars by Tim Pratt

According to goodreads they were…

Andrew Minyard and Neil Josten from All For The Game, yes that series again but their characters and relationship was just so well written.

Jesper and Kaz from the Six of Crows Duology, the best friendship that nobody has ever admitted to. Just tell him you miss him, dammit.

Not counting continuing in a series I think one of the only ones would be Artemis by Andy Weir. Which is fine because Artemis was brilliant. I read the Martian by him but enjoyed this one better.

18. Best book you read based solely on recommendations and peer pressure?

This Savage Song by Victoria Schwab. I actually haven’t read many this year and the ones I have read didn’t really live up to the pressure. Which mends I was probably right not to read them but this was a really good book.

I don’t know anything about authors, honestly I’ve taken most of the author questions out just because I read books by blurbs not by the names on the front! But after looking through every book to try to figure out if they were debuts I could only find this one, but it got five stars from me so….

Sea, The Huntress by Sarah Driver

Artemis is set on the moon and there are so many little details that really sold it from the stairs being bigger because you could jump higher with lower G to the worry about fire in a closed environment. Tarnished City is set in a modern England that has been ruled by magic for a couple hundred years so you get a really strange mix of modern and Victorianesque setting which was really interesting. And Crooked Kingdom is set in Ketterdam, a fantasy version of Amsterdam, which was really vivid and really felt well built.

21. Book that put a smile on your face/was fun to read?

Carry the Ocean, even if it was dealing with difficult issues just seeing such a supportive family and a book from more diverse perspectives was brilliant.

I’ve counted all of these together because I felt all of these while reading this book. We were liars. It killed me, I was lying on my bed staring blankly at the ceiling for hours after I put it down.

Inherit the Flame by Megan O’Keefe. Inherit the Flame was the series ender for the Scorched Continent Trilogy which is a great series that does not get enough love. The first book is called Steal the Sky.

I really don’t follow enough book blogs and I’m hoping to find more that I love this year but here are a few that I’ve really enjoyed reading through in 2017:

Emma from Stark Reviews, Alice from Stones of Rome,  Lia from Lost in a Story, and Liz from Travel in Retrospect

My most popular posts are not bookish but my most popular bookish post was: Top Ten books that surprised me, the good and the bad and my favourite post was probably:  Bookworm Problems of a Mood Reader.

2. Series ending/sequel you are most anticipating?

The Queen of Air and Darkness (The Dark Artificies) and Bright Ruin (Dark Gifts) are two series enders that I can’t wait to read. And for sequel….I am going to read A Gathering of Shadows this year, okay?

3. A 2018 release you’ve already read and recommend to everyone?

Phew, that was a rather long post. I tried to spread out the love but a few things did just keep coming up. This year was a pretty great year for reading and I’m really excited to read some of these sequels and finally get around to some of the books I didn’t read this year (hopefully!)

What was your favourite book of the year and who were your favourite characters? Is there one book you’d recommend everyone to read? I’d love to know in the comments.