Another month down and another Bookish wrap up for you. It’s almost Christmas. More importantly it’s almost November. I’ll be doing nanowrimo next month which is why this post is a little early. I wanted to get my reviews up and out of the way so I could concentrate on my story. So here they are. 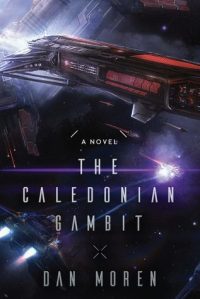 The Caledonian Gambit by Dan Moren *****

Kyle Rankin is a soldier who has spent the last few years of his life scrubbing toilets on Sabea but when a new gateway in the galaxy opens he gets a chance to go back to his old life as Eli Brody, a soldier for the other side who had been stranded on Sabea since their old gateway had been destroyed in the war. He does it reluctantly. In fact, most of the things the protagonist in this book does are reluctant. Every situation he gets put in he just goes along with and lets himself be manipulated by whoever is closest. It was very frustrating, and while I know there are real people like that it doesn’t make for a very likeable character. I didn’t really route for him at any point. And even when he’s not being told what to do I didn’t think his internal motivations for things really add up. It was a fun and twisty Sci fi. The world/s and settings were all well fleshed out and believable but the main issue I had was that the main character was very weak. It does however have a brilliant opening line:

Elijah Brody was being attacked by butterflies. To be fair, they were only targeting his stomach, but they were angry and fluttering around in a malevolent way that he wouldn’t previously have associated with butterflies.

I have heard a lot about this book and I’ve been wanting to read it for a while now so when it went on offer I snatched it up. The first thing I have to say is that yes, this is obviously a kind of spoof of Harry Potter. Chosen one, headmaster mentor, magic school, it’s a little bit spoofy to start with but once everything had been set up and the story gets going its really enjoyable. I loved the characters especially Baz (the pureblood Slytherin who even has the Malfoy like slicked back hair) and the growing relationship between him and Simon Snow (the main character and chosen one) is really well developed. This book isn’t ground breaking, bits were rather obvious and it does get its ideas from Harry Potter but overall it was a really fun, lighthearted and enjoyable read with lovable main characters that you really route for. I just wish that the appendages didn’t end up the way they did…. That’s the only way I can say that without spoilers!

Lord of Shadows (The Dark Artifices #2) by Cassandra Clare *****

So this is difficult for me to rate because I gave the first book in this series four stars and I’m giving this book four stars but that was a 4- and this is a 4+ and there is an infinite amount of difference between the two. That book had some things that I loved. Some side characters that I loved and the world created in these books is great but the main story in that one followed Julian and Emma and I didn’t like either of them. I went into this book fully expecting to skim over a lot of it but needing to read it for those side characters I loved in the first book. The good news is that in this book the story is spread out a lot more evenly over the cast of characters so while there are still Julian and Emma bits (and yes, I skimmed over them) there are lot more good bits. And it was very good. I can’t wait to see what happens next and lots of things get hinted at that I’m excited to see. I’m so glad I picked this up in the end. And that ending was…. Well. I need the next book now please? I don’t feel like I can give a book 5 stars when I’ve skimmed over bits but the rest of it was VERY good.

“Fiction is truth, even if it is not fact. If you believe only in facts and forget stories, your brain will live, but your heart will die.” 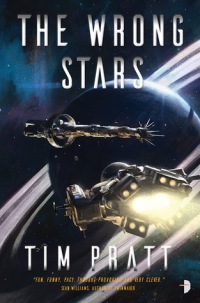 Callie is captain of the White Raven and her small crew stumble upon a ship that is hundreds of years old from before humans had colonized the stars – sent out five hundred years ago with a blind hope that they’d find habitable worlds. On board they find a woman in cryosleep and when they wake her up she starts screaming about first contact. Unfortunately for her, humans have known and worked alongside aliens for ages, only the aliens she describes sound nothing like the harmless ones that they know about. What follows is an action packed space opera that focuses on the characters rather than the science. The story has a great amount of diversity (I think we get at least mentions of the whole lgbtqia spectrum if not main characters for a lot of them) and plenty of twists to keep you nervous. What I would say is be aware there are scary spider-like alien things, so maybe don’t read just before bed time if, like me, you hate spiders. But that aside, I’d thoroughly recommend this book to any one looking for a scifi space opera that isn’t too heavy on the science.

Next month I’m going to be on a contemporary kick because I always struggle to read the same genre as I’m writing. It all gets very confusing in my head. I’ve got quite a few contemporary books that I’ve bought on offer over the last few months on my kindle so it’ll be a perfect opportunity to get through some of those. So expect to see some of these in next months review post.

What about you, what was the best book you’ve read this month? Have you read any of these, what did you think? And if you write, do you struggle to read at the same time?