Following on from the mid year theme of my last post I thought I’d do a bookish version. Normally I don’t really read enough books to take part in things like this after a full year but reading is going really well and, having 40 books to pick from already, I thought I’d give the mid year freak out book tag that’s been floating around my feed lately a go. 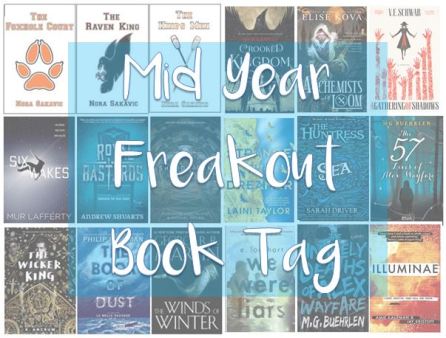 I’m going to go for the All For The Game trilogy by Nora Sakavic (I realise that’s three books but shhhh!) it was amazing! Honourable mentions to: Starship’s Mage, We Were Liars, The 57 Lives of Alex Wayfare and Crooked Kingdom, which were all five star reads for me.

I haven’t read that many sequels this year but I started the year by reading Crooked Kingdom and loved it. Not quite as much as Six  of Crows but it was still brilliant.

Six Wakes by Mur Laffety, Royal Bastards by Andrew Shvarts and Shadow Run by Adrianne Strickland and Micheal Miller, are 3 books that I was mega excited to read this year but none of them are available on kindle (at least in the UK) so I haven’t been able to read them. I’m mad!! I should email the publishers or something but I never get around to it. Also Strange the Dreamer by Laini Taylor which is available but its £9.99 for the ebook and I mean really? I’m not paying that much for an ebook considering most of the books I buy are on deal for less than £2. I stretch to £5 if I REALLY want to read it RIGHT THIS MINUTE. But not that high.

The Wicker King by Kayla Ancrum, The Book of Dust by Philip Pullman, Winds of Winter (ASOIAF) by George R.R Martins (hey man, I’m eternally optimistic that this book will be released at some point…)

The Untimely Deaths of Alex Wayfare or Illuminae. This is a difficult one because I didn’t hate either of these (they were both 3 star for me) but I’d loved the previous Alex Wayfare book and Illuminae came with a massive amount of hype and just, neither lived up to my expectations.

I picked up both of these because they were on deal and I’d heard decent things about them and I was not expecting to love them as much as I did, (I’m only putting the first book in the All For The Game trilogy here because once I’d read the first it was NOT a surprise how much I loved the others) and hell if they didn’t give me the most ridiculous and long lasting of book hangovers.

I don’t really follow authors, like, even if I really absolutely love a book I won’t go and check what other books that author had written. If I come across a book that sounds good and then realise that it’s by an author I’ve previously liked then I might be slightly more inclined to read it or rather boost it up the list a little but I never seek books by certain authors out.

…i don’t…? I have loads of favourite characters that I just can’t get out of my head but not in this way.

Andrew Minyard from All For The Game, my little five foot ball of anger with a racket.

We Were Liars by E Lockhart. Just. Daymn. That book. I’m not someone who cries reading  (or watching) but this book physically hurt me.

This is a bit of a weird question to me, any book that I enjoyed reading made me happy but I’m assuming it means more…. Story wise? And I don’t know, fantasy books aren’t normally necessarily…happy. I really enjoyed reading Sea by Sarah Driver which was a very magical children’s story and also the 57 Lives of Alex Wayfare by MG Buehrlen was also quite feel good? In a weird way? I mean it wasn’t happy… But… I don’t know man.

I really don’t watch that many movies. There’s loads that I’ve been like, oh I should watch that but….

Does Handmaid’s Tale count? That’s not a movie and I haven’t even finished watching it yet but that’s the closest I can come, which gives you an idea of just how little tv/films I watch.

I really don’t think I’m very good at reviews (I’m trying, okay?) but I’d say maybe We Were Liars for the complete lack of coherent thoughts I had about the book (….it hurts!) or perhaps my slightly scathing review of Matilda (where the best thing I could say about it was that I liked the musical).

This Savage Song? I’m looking through my goodreads shelves looking at covers (because I don’t buy real books anymore) and I honestly am not coming up with many pretty ones. Sea? Crooked kingdom maybe?

All of the books I mentioned in questions 3 & 4. I’d also really like to read Alchemists of Loom by Elise Kova and A Gathering of Shadows by VE Schwab. I  have both of these already but I’m a massive mood reader and I’m waiting till the right time because I want to love them.

I tried not to repeat the same books so many times but a lot of the questions line up. It was interesting to look back over them and it’ll be interesting to compare my answers at the end if the year too to see if my favourites survive and if I ever do manage to get around to reading those books I want to.

What about you? Do you read by author? I’ve seen a lot of people blogging about their favourite authors and am starting to feel like the odd one out for not having any! I’m not going to tag anyone directly but if you think this would be fun for you to do then I would love to read your answers.