I read a lot on holiday. Which was awesome! Until I got back and realised I had to write five reviews in a week. Technically, and if you follow me on Twitter you’ll know this, I started reading Blue Lily, Lily Blue before I left. In fact I read half of it. So I read four and a half books not five but considering I thought I’d read at most four that’s still pretty good.

So here’s my Memo Pad: Holiday Edition or the one where I tell you how much of a sucker I am for good characters. 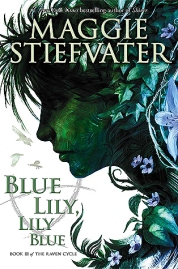 This series really confuses me. Barely anything happens but I love it? There’s absolutely no doubt that this is a character led series which is fine by me when the characters are all brilliant. They all get their chance at the front and none of them are there just as side characters. The relationships are all developing but I just kind of wished it moved a little faster. I didn’t love it as much as the first two books.

Damen is a warrior hero to his people, and the rightful heir to the throne of Akielos. But when his half brother seizes power, Damen is captured, stripped of his identity, and sent to serve the prince of an enemy nation as a pleasure slave. Beautiful, manipulative, and deadly, his new master, Prince Laurent, epitomizes the worst of the court at Vere. But in the lethal political web of the Veretian court, nothing is as it seems, and when Damen finds himself caught up in a play for the throne, he must work together with Laurent to survive and save his country. For Damen, there is just one rule: never, ever reveal his true identity. Because the one man Damen needs is the one man who has more reason to hate him than anyone else…

This is a bit of a weird book. I wasn’t really expecting much of a nuanced story but the relationships between the characters are all really complicated and subtle and I actually really liked that. It makes me want to read the next one because I want to learn more about them and that’s always a good thing.

In the near future, scientists create what may be a new form of life: an artificial human named Charlotte. All goes well until Charlotte escapes, transfers her consciousness to the Internet, and begins terrorizing the American public. Charlotte’s attacks have everyone on high alert—everyone except Lee Fisher, the closeted son of the US president. Lee has other things to worry about, like keeping his Secret Service detail from finding out about his crush on Nico, the eccentric, Shakespeare-obsessed new boy at school. And keeping Nico from finding out about his recent suicide attempt. And keeping himself from freaking out about all his secrets. But when the attacks start happening at his school, Lee realizes he’s Charlotte’s next target. Even worse, Nico may be part of Charlotte’s plan too.
As Lee races to save himself, uncover Charlotte’s plan, and figure out if he can trust Nico, he comes to a whole new understanding of what it means to be alive … and what makes life worth living.

I really liked this, at the same time a lot of it was very predictable and I almost felt like I’d read it before because it wasn’t very original. Whenever an AI is involved in a book there always seems to be a love story attached to ask the question of if they deserve to be alive. But I did really love the characters. I honestly don’t care about originality if your characters are amazing and both Lee and Nico are really likable. So I really liked this book. (Also does anyone else have certain names that make them predisposed to like a character? or am I just weird? Nico is one of mine.)

This Savage Song by Victoria Schwab *****

There’s no such thing as safe in a city at war, a city overrun with monsters. Kate Harker and August Flynn are the heirs to a divided city—a city where the violence has begun to breed actual monsters. All Kate wants is to be as ruthless as her father, who lets the monsters roam free and makes the humans pay for his protection. All August wants is to be human, as good-hearted as his own father, to play a bigger role in protecting the innocent—but he’s one of the monsters. One who can steal a soul with a simple strain of music. When the chance arises to keep an eye on Kate, who’s just been kicked out of her sixth boarding school and returned home, August jumps at it. But Kate discovers August’s secret, and after a failed assassination attempt the pair must flee for their lives.

So I saw a description of this that said:

And that is actually a really good description. Also a really enticing one, I mean I would have wanted to pick up this book if I had seen only that.

August spends pretty much this whole book making me want to give him a hug. And Kate is a badass with a soft core and I’m realising that this whole post is just me telling you how much I like the characters in the books. It’s probably starting to sound repetitive.

I also want to say that I absolutely love when a book has some kind of rhyme /song in it. Even if I haven’t read the book (I’m looking at you mortal instruments) I love when they are there. I’m not sure why. It’s irrational the amount that I love them. This review is a mess but its a brilliant YA book and you should read it.

The Untimely Deaths of Alex Wayfare by M.G Buehrlen *****

So. This is a good book. I wanted to start by saying that before I explain my very biased rating. Because I am aware enough to know it’s kind of unfair but I’m not changing it. There is a betrayal in this book. And I feel betrayed. Its as simple as that. The end of the first book promised me something and I never got it. I don’t like when that happens. I was expecting a certain kind of sequel and this wasn’t it. It was good but it wasn’t the book I was expecting.

I’ve been wanting to read this book for ages. So I’m really not sure what happened here. I don’t think this is a bad book but I found myself skimming so I stopped. Maybe it starts slowly. I’m hopeful that I will eventually give this another shot.

So some of these reviews weren’t exactly great but writing five reviews in a week is hard, okay?

What have you been reading? Have you read any of these? Do you blast through books on holiday or do you not read at all? I normally end up in a reading slump when I come back from blitzing books on holiday which ends up evening out my reading anyway. And yes, I am in a slump right now, as expected.