Having finished my table runner I decided to dive straight in to starting my quilt.

The plan originally was 3 different blocks of each of the six patterned fabrics I’ve chosen. Each of which would be sashed in white and then joined and bordered in white too (or maybe bordered in yellow or navy if I’m feeling adventurous when its done). 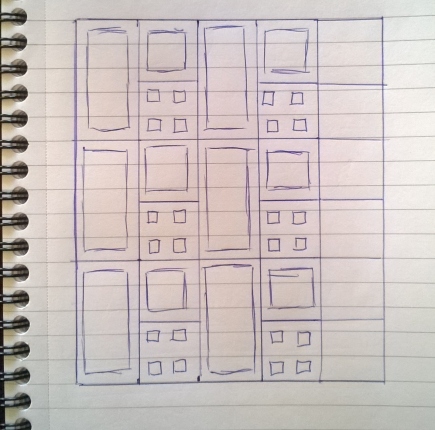 After redoing my calculations before I started, I realised that this would make a rather narrow quilt so I’ve decided to do an extra block of each fabric. Thankfully I have enough left of each of the fat quarters to do this.

(This isn’t going to be the layout, it will be more mixed up than this but it gives you and me an idea of the size and how it will fit together)

All put together it would make a quilt that would be about 5 by 6 foot. Which I think would be a perfect size for my small double bed. It’s 4 foot wide so a 6 inch over hang on the sides sounds about right to me (not that I’ve ever made a quilt before, obviously).

So once I’d double checked all of this, it was time to start cutting. And let me tell you that was very nerve-racking. I only have one fat quarter each of the pattern fabric I need and its 21inch wide, my largest block is 21inch long so I didn’t have any room for error. I bought the fabric from America with ridiculous shipping costs so I did not want to get it wrong! I think I checked my measurements about ten times before I cut! 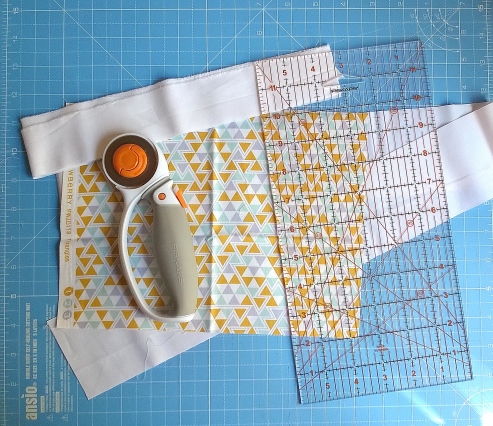 But I managed it. Phew.

And I’ve managed to piece all four of the first fabric blocks to show you. I’m quilting as I go, which means quilting each individual block and then joining them up at the end and I’m using Hobbs fusible 80/20 batting which is a life saver. Seriously. I hate pin basting but this stuff is so easy! All mum had to do was iron it and TADA no basting needed.

So here are the four blocks: 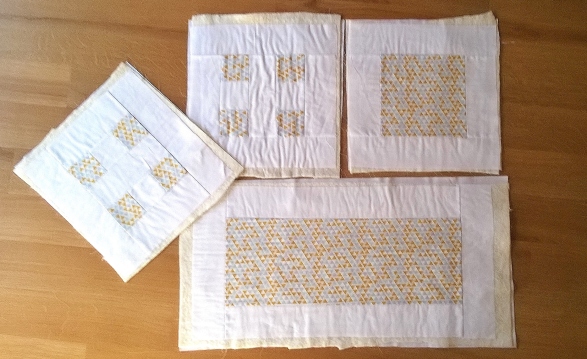 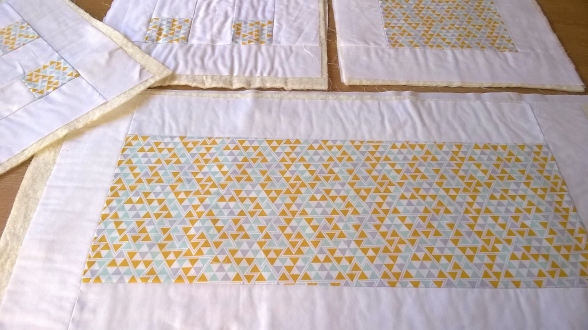 For some reason these photos have picked up every small bump but the fabric is actually very flat and secured well front and back.

The blocks of each pattern will be mixed together in the quilt, they won’t be sat next to each other like this but I’m doing each fabric together. The square blocks are both 12.5 inches, which is a good size for quilting on my poor little sewing machine. The rectangle is 25 inches by 12.5 inches.

I’m not certain whether to do the small squares as the extra block every time or to do the middle sized square half of the time. I have enough fabric to do either. Some of the patterns are larger than this one so maybe those ones I can do the medium block for….

One thing I will say is that the batting is a lot thinner than I was expecting it to be. I’m not sure if that’s because when I imagine a quilt I think thick and snuggly and my expectations were just way off or because this is thin batting. None of the reviews mention it’s thin so I’m thinking the first. This is also probably swayed by the fact that I’m one of those people that like really heavy duvets. If I stay in a hotel with just sheets I go through all the cupboards looking for a blanket to add weight.

Also, I’m using guttermans cotton quilting thread and it feels very coarse compared to the thread I usually use. I’m a little worried it’ll be rough against my skin when the quilt is done. But that’s the thread that the internet recommended and it was in my local craft store so I bought it…..

On the subject of thread, I know I want to use white for all of the white area on the front but don’t think I want to use it on the patterned fabric. I’m thinking maybe using a grey or blue or even a yellow but I’m really not sure. I don’t know whether to match the fabric, so use yellow on the yellow pattern and blue on the blue, or stick to one colour for all of them. What do you think? And I don’t know whether to do front and back with the different colour or keep all the stitching on the back white. I’m a little worried about the guttermans being thicker than the coloured thread if I do both together.

Here’s the patterned fabrics again to give you a better idea. I’m planning on using the bottom row. 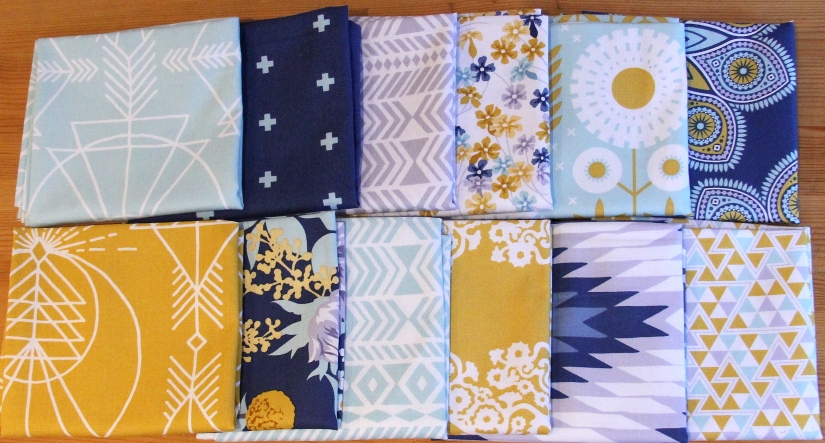 It’s all very exciting. I’ve gotten carried away as I’ve cut and pieced the blocks in just over a week and I definitely over did it. I need to pace it out a bit more but I wanna do it! Things are going more quickly than I thought and I’m not sure if it’s because I’m doing too much or because it’s simply quicker than I thought it would be. I think I will need to figure out my pacing as this is all such a new thing to me.

If you stuck with me to the end thanks! I realise that was quite a long post!

So what do you think? Is batting generally thinner than I think it should be? Anyone used fusible batting before? I know its more expensive but so far, it’s been totally worth it. Also, guttermans thread, a bad idea? And what colour thread would you use over the patterned fabric?

26 thoughts on “My First Quilt – The Beginning”