I’ve been Nanoing all month which has meant I haven’t read much at all. I miss reading so much. I’m really glad I saved the Harry Potter short stories for this month but I only managed to read one other book. Here’s hoping I can read more next month. 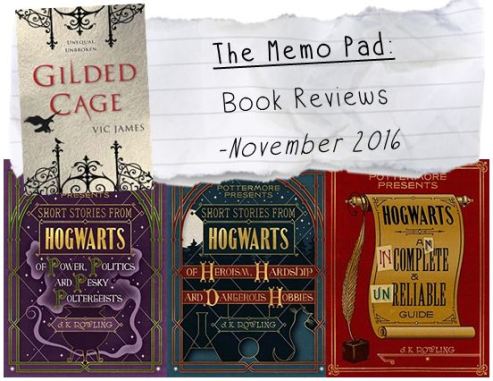 Short Stories from Hogwarts of Heroism, Hardship and Dangerous Hobbies by JK Rowling *****

I really enjoyed reading McGonagall’s and Lupin’s back stories. We do know the big facts already but it goes more in depth and these are two great characters. I’m really glad we got to find out exactly out to become an animagus (no,I haven’t been trying it myself….) Side note: These books are going to be really helpful for writing my harry potter fan fic. The insight into some of the other teachers was cool as well.

Short Stories from Hogwarts of Power, Politics, and Pesky Poltergeists by JK Rowling *****

This book started well, I liked the stuff about politics, the small bits of Umbridge’s back story that we didn’t know just made her even more real and the list of Ministers of Magic and what they’re remembered for was very interesting. But I was very disappointed in the potions part. And alright, it isn’t in the name of the book but as soon as I saw there was a section on it I was excited. But it just didn’t deliver. The prelude of the chapter asks: What makes a truly great potions master? We never get told. We’re asked: Why is Hermione’s ability to brew polyjuice as a send year student remarkable?Answer: Because its difficult….. Really? That’s all you’re giving me? Having just read the previous book, which outlines each step needed to become an animagus, couldn’t we have gotten a little bit more than Snape is a stereotypical potions master and polyjuice is difficult to brew? I feel like JK could have easily added a sentence or two to this section and it would have made it so much better. But oh well. At least the poltergeist part towards the end was interesting.

Hogwarts: An Incomplete and Unreliable Guide by JK Rowling *****

Well, the first one was great. The second one was mostly great with a disappointing section and this third one was just disappointing. I almost feel like JK came up with three great sounding titles but then didn’t really have anything to fill them. There wasn’t much of any new information in this. This maybe had a couple of lines of interesting things in. I honestly don’t feel like it would have taken long to make up some new things. Tell me about a new secret passage that links two areas of the castle or a funny anecdote about a student getting lost because he followed the wrong portraits advice. JK could have sat down and written something like that in an hour and added it in and made this book worth reading.

Overall, if your a potterhead definitely read these. I loved them so much more than the Cursed Child. They aren’t stories, they’re information books but I knew that going in. But there’s no way these are worth £3 each. It’s pretty disappointing how much they’re trying to milk money out of this now. I have no problem with new things coming out but £3 for each of these and £10 for the ebook of the Cursed Child is ridiculous. Sell us new stuff, don’t extort us. My friend gave me her copies of these to read (thanks!) because there was no way I was buying them at that price.

Our world belongs to the Equals — aristocrats with magical gifts — and all commoners must serve them for ten years. But behind the gates of England’s grandest estate lies a power that could break the world.

A girl thirsts for love and knowledge.
A boy dreams of revolution.
And an aristocrat will remake the world with his dark gifts.

First of all I was expecting this to be a modern setting, right up until the guy arrived on a motorbike which caused some quick rearranging in my head. Basically this is our world but history diverges when Charles I is killed by a guy with magic (Skill) and now those who are skilled (and skill is passed down through bloodlines so think a ruling class of aristocrats with magic) rule those without it. I liked this book. It’s very YA which isn’t a bad thing but just something to know. The characters were great, especially Silyen. I like morally grey characters and I hope we see more of him in the next book. It had some great twists that make you intrigued and infuriated in equal measure and I’m looking forward to reading more.