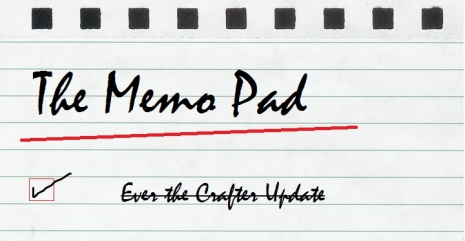 It’s Christmas! A lot of christmassy things have taken over this month. From wrapping presents and sending cards, to making some jam tarts with Dad. The tree went up and was decorated. Presents were upwrapped, cards were received, and jam tarts (among a LOT of other things) were eaten. There hasn’t been much time for anything else this month. I haven’t really done any crafting apart from finishing off a little of the christmas gifts. But I am looking forward to settling down and getting back into some cross stitch projects. I also received a small needle felting kit so will giving that a go at some point soon. I did managed to write a little bit more of a Harry Potter fanfic but I do mean a little bit.

The Shadow of What Was Lost by James Islington *****

This was very nearly a four star for me. Books like this make me think I should be rating them out of ten rather than 5 as it gives me a little more lee way. Overall I thought this was a very good book. But towards the end (say about the last third) it starts jumping a bit too much. Really obvious things that we have no idea about what they mean start showing up and for me it ruins the book. It shoves some things in our faces and says look this is going to be explained in the next book. I get that it creates suspense and mystery but I really don’t like it. It reminds me of Magician by Raymond E Feist. I never did get round to reading the sequels to that either.

I didn’t have as many problems with this plot as I did with the first book in the series apart from one glaringly obvious thing near the end. I definitely enjoyed reading this, it was interesting, fast paced and kept me hooked all the way through. It is a pretty formulaic dystopian story but I read it in one sitting and thought it was good for what it was. I will be reading the next book soon too. I’d recommend this series to anyone who likes dystopian fiction like The Hunger Games or Divergent.

See above. A good finale for the trilogy.

A good solid book, nothing particularly special but a good start to the new series. I haven’t read any of Mercedes Lackey’s other books set in Vlademar and this was a great introduction. You don’t need to have read any of the others to enjoy this one. The reason I haven’t given this a fourth star is that I thought the connection between Mags and Dallen made everything a little bit too easy.

What can I say about these books? I love them so much and I’m so sad that I’ve finally finished the series. I’ll never get to go on an adventure with them again. Eli Monpress is one of my favourite characters of all time, he’s a clever, cocky, little thief akin to Locke Lamora or Eugenidies. The books themselves are rip roaring adventures, full of magic, fights and great characters and friendships. I miss them already.

I hope you have all had a nice holiday and that you all have a happy new year.